There are three criteria that affect the performance of an evaporator,

Economy (or steam economy) is the kilograms of water vaporized from all the effects (per kilogram of steam used). For single effect evaporator, the steam economy is ca. 0.8 (<1), which translates to 0.8 tons of steam needed to evaporate 1 ton of water.

So as to decrease the evaporator steam economy, the multiple-effect design uses the exhaust vapors from the product to heat the downstream evaporation effect and reduce the steam consumption.

Evaporators need also pumps, interconnecting pipes, and valves that are required for transfer of liquid from one effect to another effect and they increase both the CAPEX and OPEX of the process.

Table 1, Decrease of the evaporator steam economy by using a three effect evaporator

The temperature of the feed has an important effect on the evaporator’s economy and performance. If it is not already at its boiling point, then heat effects must take place. If the feed is above the boiling point, flash evaporation is used at the entry. 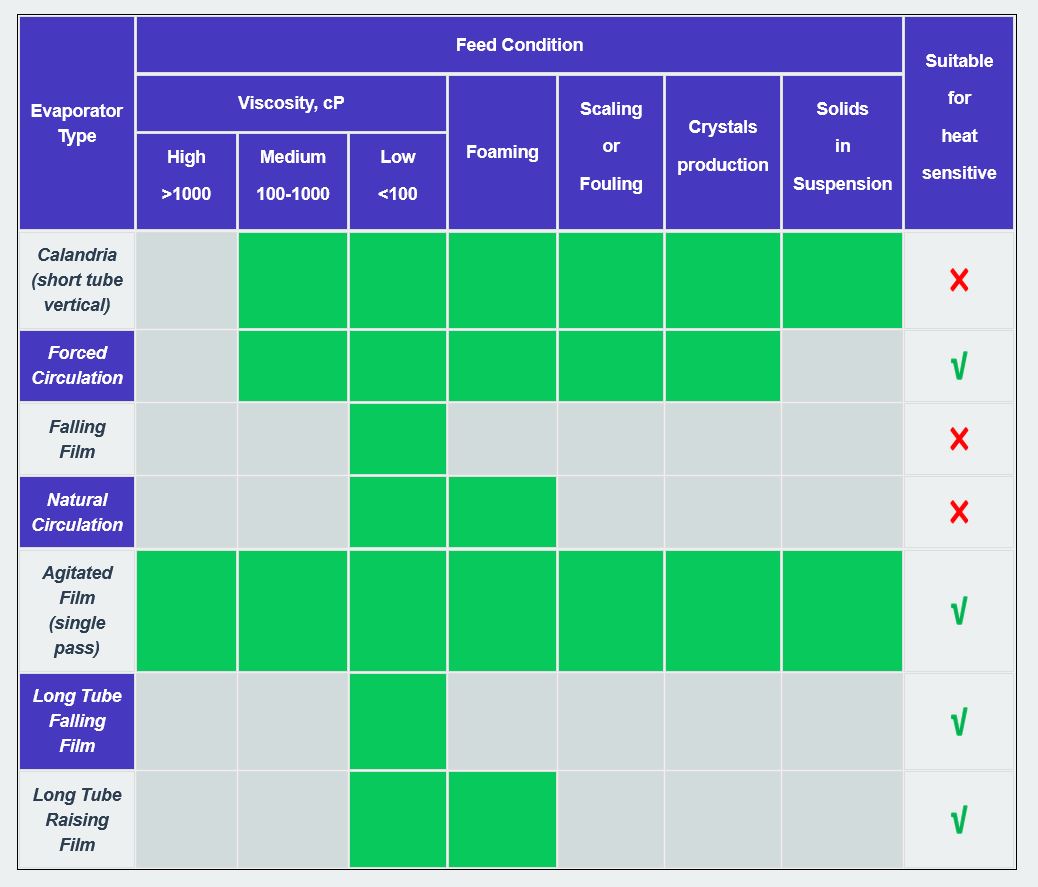 Normally, the feed solution is heated with a pre-heat exchanger to reduce the evaporation heat demand by transferring heat from the hot condensate to the feed stream.

The heated feed is then mixed with the evaporator liquid and the mixture is heated by the main heat exchanger which can use steam, electricity, hot oil or other forms of available energy. The mixture boils, producing a concentrated liquid stream and a water vapor stream which can be discharged or condensed.

Vapor compression (VC) evaporation has been the norm ZLD technology for the last decades, recovering ca. 95 % water from the feed. The concentrated liquid stream (brine) can then be driven to a crystallizer in order to be solidified.

Evaporation is rather expensive and not economically feasible with large feed flow rates, which is why a pre-concentration step is applied to the ZLD process.

There are different kinds of evaporators,

The main ones are,

FFEs have many energy-saving, multiple-effect evaporation, and mechanical vapor re-compression features. A FFE operates with a very small operating temperature and allows,

FFEs are chosen for viscous streams with small concentrations of suspended solids. An FFE has small to large flow rates capacity.

Because of the high circulation flow-rate and the evaporation taking place externally to the heat exchanger, FCEs are chosen for highly viscous streams containing a large concentration of suspended solids and fouling contaminants. It has medium to large flow rates capacity.

TFEs are mostly chosen in order to decrease the water content down to < 5% (crystallization). Like the FFEs, this technology is easy to control and fast to start up and shut down due to a very low liquid hold-up. TFEs are chosen for highly scaling products and highly viscous fluids. It has small to medium flow rates capacity.

Evaporators distillate stream is usually < 10 ppm TDS (Total Dissolved Solids). The most used is the FFE (also called brine concentrator) that can lead the feed concentration up to 300,000 ppm which leads to a boiling point rise (BPR) of the brine and requires either a large heat-transfer area (large CAPEX) or a large heat temperature (large OPEX).

Evaporators can treat streams high chlorides concentration and theoretically separate the water from all of the dissolved species producing a stable solid product that can be landfilled and a high-quality distilled water product.

The steps in the evaporation process are (Fig.3), Fig.3, Evaporation process flow diagram and a photo of a real life module. 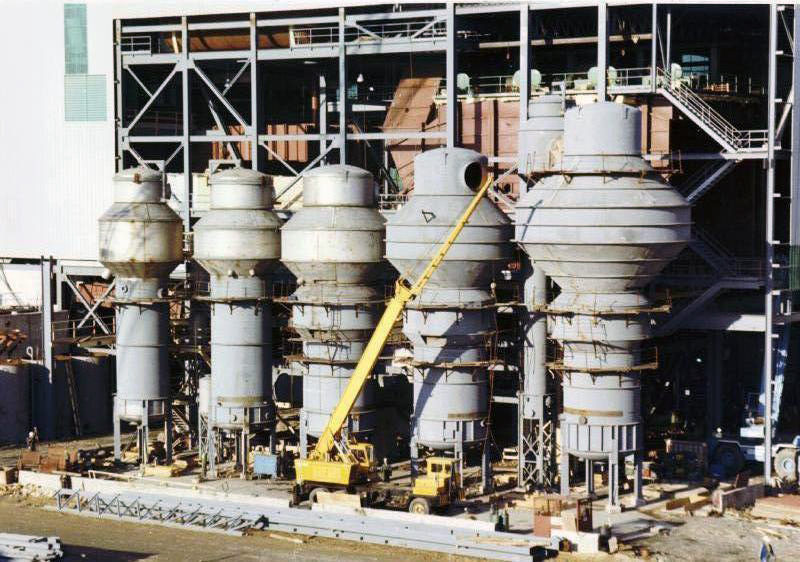 Steps 1&2; Acid is added to the feed tank to neutralize bicarbonate alkalinity in order for the solution to be preheated in the plate heat exchangers. Antiscalants are also added for preventing scaling in the preheaters with calcium carbonate.

Step 3; The pre-heated stream is degassed using steam from the evaporator (red line in Figure 3) to remove the dissolved carbon dioxide (alkalinity reduction), dissolved oxygen, and any other non-condensable gases in order to reduce the potential for corrosion of the evaporator.

The process also requires electricity for the mechanical vapor compression (MVC) cycle. As MVC recycles the latent heat of vaporization, the energy input is quite low, in the range of 15 kWh/m3 of feed to minimize the size and cost of the vapor separator and compressor, evaporation occurs at atmospheric pressure.

Some of the methods applied for minimizing the energy consumption of the evaporation plants include,

For evaporators, the MVC approach is the most widely used.

In the MVC evaporator, heat is transferred to the circulating stream by condensing vapor from the compressor(s) (increasing the vapor’s temperature and pressure). In doing so it requires much less energy than a default evaporator.

During process (Fig.4), the vapor generated from the circulating stream has a large amount of energy in the form of latent heat at a temperature of the boiling wastewater. In order for the main heat exchanger to work, a higher temperature will be required. In order to get to the needed higher temperature, the vapor is compressed by the vapor compressor. Compressing the vapor raises its pressure (thus its saturation temperature as well) and produces the needed heat transfer in the main heat exchanger allowing for recycling the energy contained by the vapor, greatly improving the total energy efficiency. 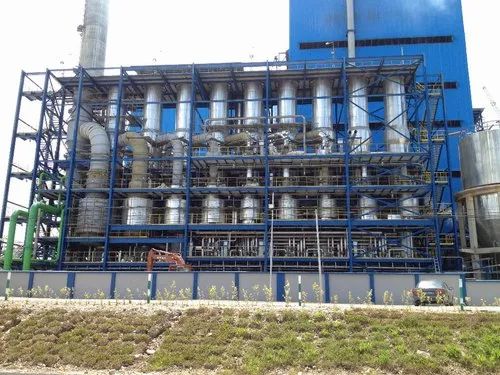 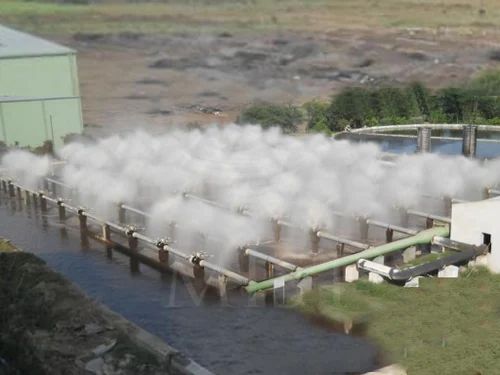